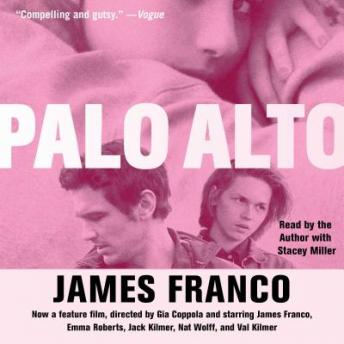 James Franco’s story collection traces the lives of a group of teenagers as they experiment with vices of all kinds, struggle with their families and one another, and succumb to self-destructive, often heartless nihilism. In “Lockheed” a young woman’s summer—spent working a dull internship—is suddenly upended by a spectacular incident of violence at a house party. In “American History” a high school freshman attempts to impress a girl with a realistic portrayal of a slave owner during a classroom skit—only to have his feigned bigotry avenged. In “I Could Kill Someone,” a lonely teenager buys a gun with the aim of killing his high school tormentor, but begins to wonder about his bully’s own inner life.

These “spare and riveting” (O, The Oprah Magazine) stories are a compelling portrait of lives on the rough fringes of youth. Palo Alto is, “a collection of beautifully written stories” (Kirkus Reviews, starred review) that “capture with perfect pitch the impossible exhilaration, the inevitable downbeatness, and the pure confusion of being an adolescent” (Elle).