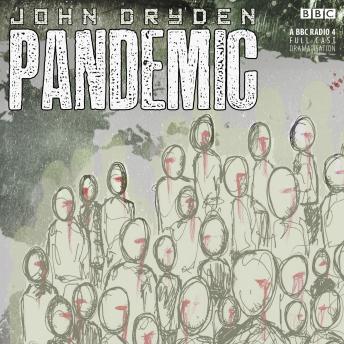 A three-part thriller by John Dryden. In Part 1, 'The Present', Dr Jan Roldano, microbiologist and WHO advisor on infectious diseases, arrives in Bangkok to give a keynote lecture at a medical conference. But when a virulent strain of bird flu emerges, he finds himself trapped in Thailand. In Part 2, 'The Future', it is five years after a global pandemic that has wiped out half the world's population. British civil servant Diane Harper is sent to Oxfordshire to investigate the suicide of a government scientist, a job that leads to a desperate search for the truth about the origins of the outbreak. In Part 3, 'The Past', eco-warrior Richard Frankel wants to give up direct action. But then he learns something that leads him into a dangerous world of environmental espionage and a conspiracy that will have a terrible, cruel and profound impact on the world. Starring Ben Daniels, Emily Beecham and Michael Maloney. ‘Radio drama at its galvanising best’ Daily Mail. ‘An extraordinarily taut piece of writing by John Dryden and the pace is faster than the deadly Red Eye virus. It should be made into a movie’ Jane Anderson, Radio Times. ‘An almost unbearably suspenseful affair…’ Gillian Reynolds, The Telegraph.