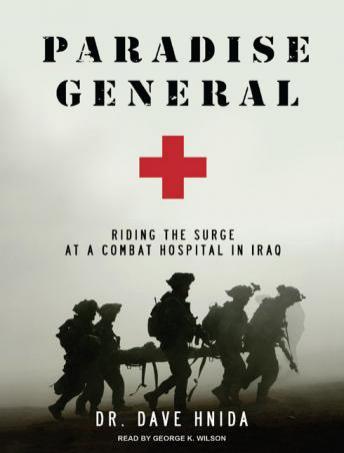 Paradise General: Riding the Surge at a Combat Hospital in Iraq

A family doctor with limited surgical experience, Dr. Dave Hnida volunteered for two tours of duty in Iraq-first as a battalion surgeon with a combat unit and then as trauma chief at the busiest Combat Support Hospital (CSH) during the Surge. With honesty and candor, and the goofy, self-deprecating humor that sustained him and his fellow doctors through their darkest hours, he provides an astonishing firsthand account of the psychological horror show of conducting medical care in the front lines of an unscripted war.

Like a modern-day M*A*S*H, Dr. Hnida and his team conducted surgery under terrible conditions in a series of tents connected to the occasional run-down building. With an unrelenting caseload, his CSH, the only one staffed by reservists-older, more experienced physicians (who were also more disdainful of authority)-soon became the medivac destination of choice because of their high survival rate, an astounding 99.5 percent.

Dr. Hnida has suffered some very dark hours. Not only were nine of the students killed in the Columbine shootings his family practice patients, but his daughter, a place kicker and the first female to score a point in an NCAA Division I football game, was the victim in a widely publicized rape case. He took from these events not hopelessness but rather an overwhelming desire to help as many young people as he could. His decision, at forty-eight, to enlist as a reservist in the Iraq war, is a true testament to his commitment to fulfill that goal.

Paradise General: Riding the Surge at a Combat Hospital in Iraq