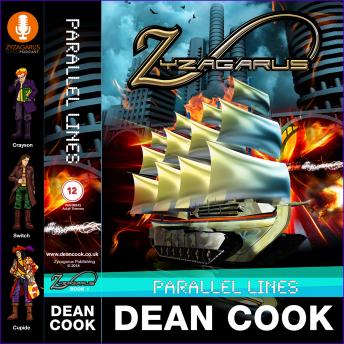 'This is amazing. Its is so BBC Radio 4.' Artificial Intelligence meets a multi-dimensional Parallel Universe of Chaos in this fast paced, gritty sci-fi comedy. Hunker down, crave, indulge and gorge on 'Parallel Lines' - The Books of Zyzagarus.
These full production Audio and eBooks offer a high 'smugify' factor, countenancing your inner simper, every word using an extreme emoticonical pattern interrupt for maximum intense, cerebral, candy pop satisfaction, due to its autonomous engagement with a secret itch that must be scratched.
'Parallel Lines' is the first in a series of Sci-Fi, Fantasy and Satire Audio Books and eBooks from new Author Dean Cook. Its a full cast, full music score and Hollywood SFX sound stage, charting the increasingly chaotic series of adventures of Crayson and Switch two protagonists hiding in their underground bunker, written in a style similar to Douglas Adams and Terry Pratchett.
Nourish your scholastic curiosity, pamper your literary indulgent inner child, cosset yourself in a world of gratuitous sci-fi/fantasy and adult humour, a much needed does of audio mollycoddling, eccentric, eclectic, base...' You, havin' a big laff'!