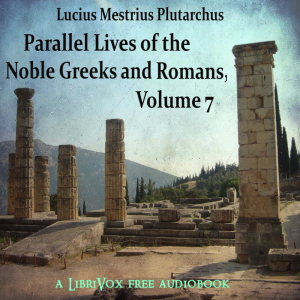 Parallel Lives of the Noble Greeks and Romans Vol. 7

Parallel Lives of the Noble Greeks and Romans is a series of biographies of famous men, arranged in tandem to illuminate their common moral virtues or failings. The surviving lives contain twenty-three pairs of biographies, each pair consisting of one Greek and one Roman, as well as four unpaired, single lives. Plutarch was not concerned with writing histories, as such, but in exploring the influence of character, good or bad, on the lives and destinies of famous men. The first pair of lives the Epaminondas-Scipio Africanus no longer exists, and many of the remaining lives are truncated, contain obvious lacunae and/or have been tampered with by later writers. His Life of Alexander is one of the five surviving secondary or tertiary sources about Alexander the Great and it includes anecdotes and descriptions of incidents that appear in no other source. Likewise, his portrait of Numa Pompilius, an early Roman king, also contains unique information about the early Roman calendar. In this copyright expired 11-volume translation from the Loeb Classical library, the order of the paired lives is rearranged to present the Greek lives in chronological order. Volume 7 presents the paired lives of Demosthenes and Cicero and Alexander and Caesar - Summary by Karen Merline. (Translated by Bernadotte Perrin)

Parallel Lives of the Noble Greeks and Romans Vol. 7