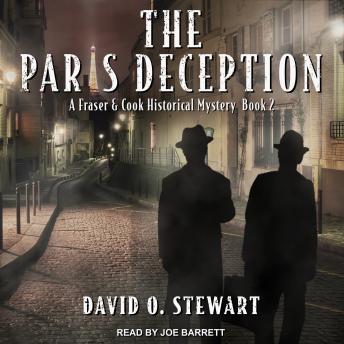 1919-1920, Paris and Berlin: In the wake of The Great War, the city of Paris unites in jubilant celebration at the arrival of United States President, Woodrow Wilson. But amidst the prospect of peace, Parisians are dying as the Spanish influenza reaches epidemic proportions.

Dr. Major Jamie Fraser is called in to advise the president's own doctor on how best to avoid the deadly disease and discovers, despite Wilson's robust appearance, the man is frailer than most realize. While trying to determine the source of Wilson's maladies, Fraser encounters a man he has not seen for nearly twenty years: Speed Cook-ex-professional ball player and now advocate for Negro rights. Cook is also desperate to save his son Joshua, an army sergeant wrongly accused of desertion.

Pledging to help Cook, Fraser approaches Allen Dulles, an American spy, who is also Wilson's close aide. Soon Cook and Fraser's quest intersects with dramatic events when the French premier, Georges Clemenceau, narrowly survives an assassination attempt, and the Paris Peace Convergence begins to unravel. When the precarious German government balks at the grim terms of the peace treaty, Cook and Fraser discover that to save Joshua, they must find a way to preserve the fragile treaty, which may be the only barrier standing between Europe and another brutal war.