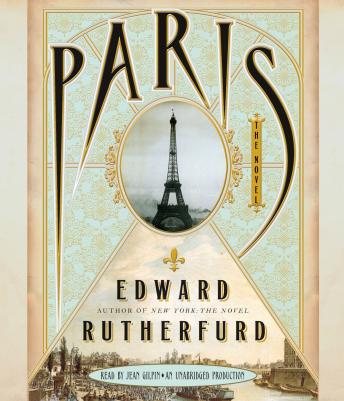 From the grand master of the historical novel comes a dazzling, epic portrait of the City of Light

Internationally bestselling author Edward Rutherfurd has enchanted millions of readers with his sweeping, multigenerational dramas that illuminate the great achievements and travails throughout history. In this breathtaking saga of love, war, art, and intrigue, Rutherfurd has set his sights on the most magnificent city in the world: Paris.

Moving back and forth in time across centuries, the story unfolds through intimate and vivid tales of self-discovery, divided loyalties , passion, and long-kept secrets of characters both fictional and real, all set against the backdrop of the glorious city—from the building of Notre Dame to the dangerous machinations of Cardinal Richlieu; from the glittering court of Versailles to the violence of the French Revolution and the Paris Commune; from the hedonism of the Belle Époque, the heyday of the impressionists, to the tragedy of the First World War; from the 1920s when the writers of the Lost Generation could be found drinking at Les Deux Magots to the Nazi occupation, the heroic efforts of the French Resistance, and the 1968 student revolt.

With his unrivaled blend of impeccable research and narrative verve, Rutherfurd weaves an extraordinary narrative tapestry that captures all the glory of Paris. More richly detailed, more thrilling, and more romantic then anything Rutherfurd has written before, Paris: The Novel wonderfully illuminates hundreds of years in the City of Light and Love and brings the sights, scents, and tastes of Paris to sumptuous life.