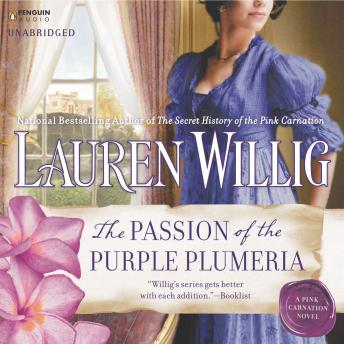 The Passion of the Purple Plumeria

Lauren Willig’s Pink Carnation novels have been hailed as “sheer fun”* and “charming.”** Now she takes readers on an adventure filled with hidden treasure and a devilishly handsome English colonel....

Colonel William Reid has returned home from India to retire near his children, who are safely stowed at an academy in Bath. Upon his return to the Isles, however, he finds that one of his daughters has vanished, along with one of her classmates.

Because she served as second-in-command to the Pink Carnation, one of England’s most intrepid spies, it would be impossible for Gwendolyn Meadows to give up the intrigue of Paris for a quiet life in the English countryside—especially when she’s just overheard news of an alliance forming between Napoleon and an Ottoman Sultan. But, when the Pink Carnation’s little sister goes missing from her English boarding school, Gwen reluctantly returns home to investigate the girl’s disappearance.

Thrown together by circumstance, Gwen and William must cooperate to track down the young ladies before others with nefarious intent get their hands on them. But Gwen’s partnership with quick-tongued, roguish William may prove to be even more of an adventure for her than finding the lost girls….