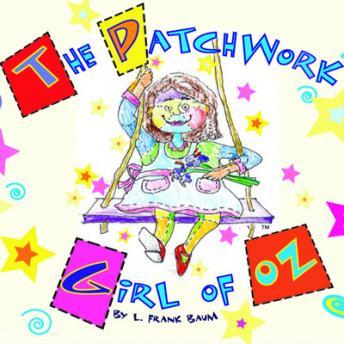 The Patchwork Girl of Oz

A patchwork doll comes to life, and Dorothy, the Tin Woodsman, and a host of new characters have enchanting adventures in the land of Oz.

After a doll made out of a patchwork quilt is brought to life by a magician, she must find a way to break a spell that has turned two victims into motionless statues. A boy, the Patchwork Girl, and Bungle the glass cat go on a mission to find the ingredients for a charm that will transform the people back to life.

Familiar Oz characters and delightful new creatures join in the whimsical adventures that take place in the magical land of Oz. The Munchkin boy, Ojo, and all the Oz Characters, including a few new ones like the Patchwork Girl and the Glass Cat, join in the search for the magic Powder of Life. Ojo's beloved Unk Nunkie has accidentally been changed into a marble statue and Ojo needs certain things for the potion that will restore Unc Nunkie to life. Looking for the ingredients for the Powder, the travelers, including Princess Dorothy and Toto (of Wizard of Oz fame), The Tin Woodman, Jack Pumpkinhead, The Scarecrow, The Hungry Tiger and the Cowardly Lion search far and wide to help Ojo. Unexpected trials force the group back to Princess Ozma of Oz and the Wizard of Oz who finally get things sorted out.

AUTHOR
L. Frank Baum
Lyman Frank Baum (1856-1919), born in Chittenango, New York, was a journalist, dramatist, and writer best known for his fantasies about the land of Oz, the first being The Wonderful Wizard of Oz (1900). The success of this book led to his writing thirteen sequels. He wrote about sixty books in all, mostly for children.

COMMENTARY
Reviews for Alcazar AudioWorks' production of The Patchwork Girl of Oz
"Alcazar Audio Works provides a delightfully directed full-cast reading of Baum's seventh novel set in Oz. A poor Munchkin boy named Ojo teams up with Ozma, Dorothy, the Wizard, a quilted patchwork girl named Scraps, and the rest of the wondrous characters to save Ojo's uncle from a wicked wizard's spell. The uncredited narrator reads with a beautiful English accent as a team of actors plays the colorful characters. Without using any sound effects, the cast brings the characters and Baum's story to life. One character, a lazy man of Quadling country, is given a surfer-dude accent, and Baum's words are updated to amusing but incongruous effect. Listeners of all ages will enjoy this whimsical fantasy. S.E.S. 2005 Audie Award Finalist © AudioFile 2005, Portland, Maine [Published: APR/MAY 05]"

""Unabridged, [but] adapted for cast read"" is such a droll description. What we have here is a masterfully executed re-telling of L. Frank Baum's The Patchwork Girl of Oz.

As a child, I knew about The Wizard of Oz. I devoured the book, you see, and was rather disappointed that the movie left so much of the story by the wayside. (Movies tend to do that, I find.) I had a lot of fun reading The Land of Oz, too, but didn't find out that there were more ""Oz"" books until I had grown up and began reading them to our own brood of munchkins.

I am a little wary of ""adaptations,"" but there's nothing to fear with this one, by Alcazar Audioworks. It's a little like hearing the tale read by a master storyteller, only better, because with its cast of twenty-three voice actors (twenty-four, if you count the narrator), each character definitely has an individual voice. This is ""Reader's Theater"" at its best!

Ojo, a young Munchkin, is forced into a heroic (or perhaps ""problem-solving"" would be better) role when his beloved ""Unk Nunkie"" is accidentally turned into a marble statue, along with the Crooked Wizard's wife. It will take the Crooked Wizard six years of wearisome effort to come up with the antidote... but Ojo and odd (I use that term advisedly) and assorted companions set out on a journey to find a more timely solution.

Our children were delighted with this dramatic reading, begging for another CD to be put on when one ended, and since we were suffering through a ""sick day"" they had the luxury of listening all the way through at one sitting. The only eye-rolling I noticed was at intervals, when something would go wrong and Ojo would bemoan his fate as ""the unluckiest Munchkin"" in the land of Oz. He finds, I'm happy to say, that luck has little to do with tackling a problem, and friends can help you overcome the worst of circumstances. But if I say too much more, I'll give away the story!

Dorothy and Toto, from The Wizard of Oz, make a reappearance in this story, and we were happy to run into other characters we remember fondly from other Oz tales, as well as make the acquaintance of several new ones, the Patchwork Girl and the Glass Cat among them.

Caution: The story contains magic, wizards, and a (""good"") sorceress, for those who avoid such things in their reading.
Highly recommended.
Reviewed By: Virginia Jones - EHO Eclectic Homeschool Online

This was a very sweet story and presented in a marvelous way. The people at Alcazar AudioWorks, who produced this version, incorporated a number of actors and actresses and really brought this piece to life in a unique way. The narrator, an English gentleman, was terrific and very easy to listen to. The acting in all the other parts was very good, as well.

It's also an excellent value, as the package included 6 CDs of content. I'll be looking for other things from Alcazar, after enjoying this one!
Listener Review - Amazon.com

Most of the audio books I've heard were simply read. Some of the the readers are more creative and try to make the spoken parts sound like different people. This book actually has different people doing the spoken parts! It really brings the book to life. The man reading the rest of the story has a wonderful voice. I could listen to him for hours! I already have.

I played the first chapter for my friend's 8 year old son. He was completely captured by the story and the way it was read. He wanted to hear more. Guess what he's getting for Christmas?

I highly recommend this book. I hope this company does more of these! I'll be watching for them.
Listener Review - Amazon.com
"