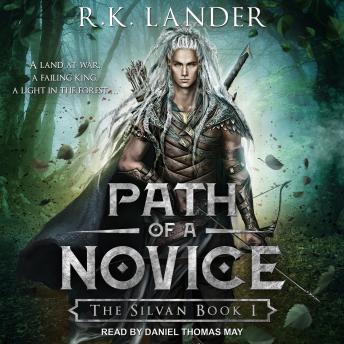 A fearless warrior. An implacable traitor. The path towards a destiny only a god foresaw.

Fel'annár is a gifted immortal warrior embarking on his first patrol into the Deep Forest. Half-Silvan, half-Alpine, he battles the enemy from without, and the prejudice from within. But he learns more than just warfare when an arcane power begins to emerge, one he cannot control.

While friendships are forged, a destiny unfolds, one that is tied to a past he knows nothing about. For others though, it is only a matter of time before the truth is revealed and the danger becomes real.

If you love high fantasy worlds with compelling characters on a dangerous mission, you can't miss Path of a Novice, Book 1 in the epic fantasy series, The Silvan Saga.

So, I got this as my free VIP book for this month, and hmm. Where to start. The narrator is good, with clear enunciation and varied voices, if some of them a bit dull. The contents of the book itself though... I wanted to like the book, being a big fan of fantasy and sexy elf dudes but I can only describe the book as trite. All the most generic and overused tropes used to poor effect. The politics in the story (where most of the intrigue/plot comes from) is shallow and extraordinarily uninteresting, so that leave the characters. And characters they strive to be, because my goodness, Felannar is a Gary Stu for the ages. I can't recall a more boring and generic character in recent memory. He's bland as white bread, his personality can be summed up as "goody-two-shoes who does the right thing but his ONE BIG FLAW is that he has a slight temper when insulted!" (the temper, incidentally, results in no consequences ever, and eventually falls to the wayside as he becomes even more passively agreeable throughout the story). He's gorgeous (or "pretty" as several characters have pointed out) with a unique trait (his eye color, go figure) resulting in looks that nobody can stop staring at? Check. He's so young, but already has perfect martial abilities? Check. Everyone around him worships/is infatuated with him because he's so strong and perfect and gosh-darned *special*? Check. Even the way Felannar talks is bland beyond measure, as he's literally characterized as having grown up trying to never draw attention to himself (because something something danger? shrug). Giving him an arrogant streak where he'll eventually be taken down a few notches as he learns his lessons would have been an improvement, but nah he's already perfect(ly bland) from the start. (but it's ok, he's special) None of the characters ever do or say anything remotely interesting, since they're mostly too busy fawning over their precious perfect protag. The characters also all start to blend together after a while, since everyone's just kind of "okay" in the book, no one's antagonistic, or flamboyant, or wild, or larger-than-life, or fun, or funny, or witty, or mysterious, or interesting at all. They're all just, exist, which is.....fine. There was a climactic battle and I'm having a hard time remembering what any of the characters did. Now for some thoughts on the prose. It's inelegant. The writing is serviceable, but the combination of clunky writing and ham-fisted, cheesy characterizations (the characters tend to react very dramatically to everything) had me rolling my eyes. A lot. Especially toward the end. I think it's a common problem where writers describe the characters with words and then forget to actually write them as described. Like, don't *tell* me that a character is strong, or that they're wise because they have wise face or something. Show me! Let them do things that describe them better and more memorably than adjectives could. Additionally, the author has a tendency for constantly explaining everything a character in a given dialogue scene was thinking/feeling as they said something, and every other character's reactions to those words. It's alright to leave some things unsaid - people can read between the lines. Leave some room for subtlety, don't need to bludgeon readers over the head all the time making sure "ya got that, right?" I'd also be passed out on the floor if I took a shot for every "albeit" and "shrewd" and "bolster" that showed up. It's a strange case of simultaneously over- and under-using the thesaurus. Odd, that. All in all, I couldn't find myself caring for the characters or the plot of the prose. I'll add one star for pretty elf boys, despite them being really boring/bland ones. 2/5 stars

Very hard to remember who is who. Complicated names and relationships mean your trying to place the character and thus miss parts of the narration

an amazing book with a new perspective on elves if there ever was one.

Dramatic and ABSOLUTELY AWESOME SERIES. Got the 1st book as VIP rewards and it was all downhill after lol. couldn't stop and had to patiently wait for book 4 now hoping for book 5 or 6 or 7.

Like others, I acquired this title as a monthly V.I.P. reward, because I am a fan of high fantasy. This book certainly qualifies, and could also qualify as a young adult fiction, relative to the characters portrayed, and literary compency needed to understand it. On the whole, this narrative brings a decent amount of original content and intriguing world building. With clear inspiration from works like Tolkien's Middle Earth and Wizards of the Coast's DND material, one can understand much of the cultural aspects of the characters presented. There's also some attempt at an internal political conflict that accounts for the fantastical character race that the protagonist belongs to. However, as a narrative, this story finds itself slipping towards painful to observe tropes. This installment of the protagonist's character is simultaneously a coming-of-age, militia training, and a 'chosen-one' story. Such stories are fine topics for high fantasy, however, this instance is pulled down by the protagonist's meteoric rise to excellence and fame, with little hardship and lack of disciplinary action most of the time he steps out of line. So few and minor are the setbacks for the protagonist happen, that halfway through, I started thinking of him as a "Mary-Sue" trope. Beyond that, the primary external conflicts of this story to the characters start seeming poorly defined, even conveniently contrived. The threats are all plainly explained, leaving little for assumption or interpretation by the consumer, and wait their turn in the narrative politely for the hero to be ready. Nothing held me on the edge of my seat to worry about being too much for the characters to handle. On the whole, I would only recommend this story to friends who want something easy to digest, or who want a reference for the kind of world building found. The reader here was easily understood however, and the recording has few errors that a consumer couldn't compensate for.

one of the listens that I have ever heard

Written for a 13 year old boy, and quite possibly by one as well. Simplistic and bland.

I enjoy the ride, looking forward to the next book.

Excellent story. Grabs your attention from the start.

Wonderful listen. Clean but one word. Must read/listen. Narrator is fantastic!

Love love loved this book! Cannot wait for the next!