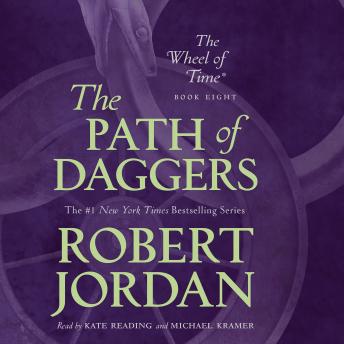 The Path of Daggers: Book Eight of 'The Wheel of Time'

In The Path of Daggers, the eighth novel in Robert Jordan’s #1 New York Times bestselling epic fantasy series, The Wheel of Time®, Rand al'Thor engages in battle wearing the Crown of Swords and wielding Callandor against a force unprepared for the wrath of the Dragon Reborn.

The Seanchan invaders are heading for Illian—and Rand's army of Asha'man soldiers. When they meet in battle, some of the Asha'man are afflicted by madness, unable to control their channeling and unleashing raw power.

The madness extends to Rand himself. He has been hearing the voice of a man believed to have been the previous Dragon Reborn. Besieged by visions and debilitated whenever he uses the One Power, Rand chooses to attack the Seanchan with Callandor. The sword consumes him with a berserker rage, felling ally and enemy alike. And when he regains his senses, Rand finds himself less trusted by those who were once the most loyal.

The book itself was fantastic. Sadly the recording had some mangle parts. I tried jumping back thinking it was my phone but Everytime I got to that part it shipped around. The jumbled issue was consistent and could not be corrected. Again, the book is great, and the narrators are so on. It's the recording that needs corrected.

Jordan does it again! if you are this far in the series, congratulations and keep going! If you are thinking about continuing, do yourself a favor and see the series through to the end!

I loved the book and give it a 4 star review however the audio book itself is jumpy and skips around a lot and I missed some content. Needs to be re recorded or something.

Love the series; but I find this to be perhaps the worst book in the series. How much did Jordan’s illness play a part in this degradation in his writing. Anyway, still a great read. I give it 3/5 in relation to Jordan’s other books; measured against any random fiction you might pick up it’s still a 5/5.

Loved it. All these Wheel of Time audio recordings are great!

One of the best books in the series. Narrators seem to get better each book that goes on.

Just as good as all the rest in this series.

Love this series just keeps getting better each book.

wonderful plot that is exciting , but poorly written with conflicting social constructs

Another wonderful reading by the narrators. A better pair could not have been found. The novel itself, on the other hand, suffers from the same malady as the previous installment: far too many new threads introduced, and nearly no resolution to the current dangling ones, leaving the reader feeling that scant progress had been made in the overall narrative. To top this off, almost all major character arcs are left in a cliffhanger. So to top off the lack of progress, there is no sense of closure. This is a portion of the overall world of WOT where things feel very mired, in my opinion. I look forward to the brisk pace of former installments returning, though I’ve heard I have a while yet to wait.

This is a very good book and well written. I enjoyed the narrators, they did a good job. Great series!

Nice installment after a dry book 7, this is a nice pick me up.

Love this Series, heard that they may be doing a TV series of these books, voice actors are ok, just don't like it when one well speak in a British accent then when, for the same character, the other reader comes in there's no accents, just something funny if pay attention to it.

What can I say. If you have made it to book 8 of this series you are already a fan. I both read and listened to this series. I am a huge fan of the 2 narrators. It is nice to have both male and female voices.