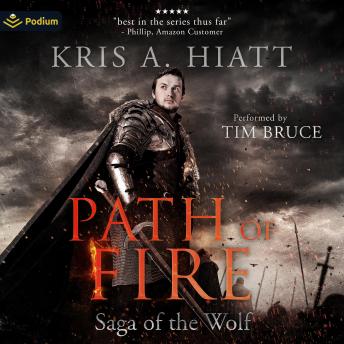 Path of Fire: Saga of The Wolf, Book 3

Written By: Kris A. Hiatt

'After returning home to Lake City for a family emergency, Treace confronts an old foe. Events spiral out of control and a murderer goes on the loose.


Haven prepares for the inevitable war by building defenses and training those that are ready to fight. Even with those fortifications and Treace’s new found powerful magic it might not be enough.


Old enemies return, but one may turn out to be a friend. Even so, can they truly be trusted or will they betray the folk of Haven to the self-proclaimed King?


As the losses stack up and with the outcome of the war hanging in the balance, Treace will have to confront his nemesis, Disdane; the only man to have beaten him in single combat. Is Treace up to the task or will he fall, yet again, to the powerful man?

Path of Fire: Saga of The Wolf, Book 3

by Kris A. Hiatt