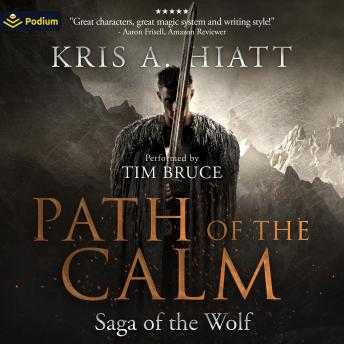 Path of the Calm: Saga of the Wolf, Book 1

Written By: Kris A. Hiatt

'The young world of Onneron has known peace for years. But now, unease has spread across the land as disagreements between factions threaten each other’s way of life.


The Brothers of the Onneron College dedicate themselves to higher learning and to mastering Paths of magic. They wish to remain independent, but the Onneron Church feels threatened by their ability to heal and vies to take control of their order.


Treace, bullied and belittled, is unaware of the plan his deceased father has for him. A mentor sets him upon a path to join the prestigious College. Even if he is accepted, the tides of change are coming.


To Treace, it’s not about where we end up — it’s the Paths we take to get there that matter.


Path of The Calm is the first book in the epic Saga of The Wolf series that follows Treace as he grows into a young man. It explores the bonds of friendship, deception, life lessons, love, swordplay, and magic.

Path of the Calm: Saga of the Wolf, Book 1

by Kris A. Hiatt