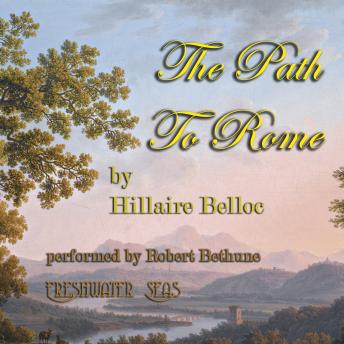 The Path To Rome

As Hillaire Belloc explains it, one fine day while walking about the town in norther France where he was born, he suddenly decided to take a pilgrimage to Rome. Not just any pilgrimage, mind you. He not only decided to walk the whole way, but he decided to make a beeline for the Holy City, doing everything possible to avoid leaving the straight path - a path across France to the Vosges Mountains, from their across Switzerland, across the Alps like Hannibal, across the Apeninnes into Italy and thence down the boot of Italy to Rome. All on foot, he vowed.

Well, he very nearly did it. He did make it to Rome, but he wound up riding on carts or in trains for about ten percent of the way. However, all the mountain travel was on foot, and he gained by it, for he constantly found himself in unexpected places, seeing unexpected things. He takes us with him all the way, sharing his heart and mind with us in the most guileless and pleasant fashion.

He was a devout, somewhat conservative Catholic, and his faith suffuses the book, but he does not proselytize, nor preach. Catholicism for him is a deeply rooted habit of mind and soul, not something to be dumped onto someone else like a load of firewood. Nor does he allow his faith to impose any load of solemnity on him. He is lighthearted, digressive, full of stories, perceptions, wisecracks, smart remarks and general playfullness. Underneath it, however, lies a will of iron; neither hunger, fatigue, lack of sleep, lack of money, lack even of decent footgear or the ability to speak the local language stops him. He is thwarted only once, and his tale of that time is thrilling.

There is a reason why this book has been in print for over a hundred years, and it is a simple one: it is delightful. His journey through the heart of Europe is both a lark and a true pilgrimage, and we are his boon companions along the way. A Freshwater Seas production.