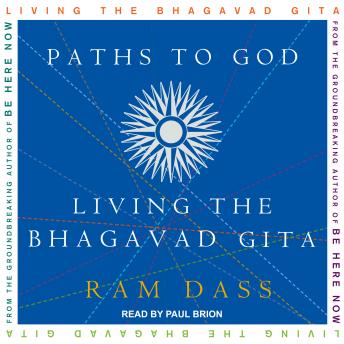 For centuries, readers have turned to the Bhagavad Gita for inspiration and guidance as they chart their own spiritual paths. As profound and powerful as this classic text has been for generations of seekers, integrating its lessons into the ordinary patterns of our lives can ultimately seem beyond our reach. Now, in a fascinating series of reflections, anecdotes, stories, and exercises, Ram Dass gives us a unique and accessible road map for experiencing divinity in everyday life. In the engaging, conversational style that has made his teachings so popular for decades, Ram Dass traces our journey of consciousness as it is reflected in one of Hinduism's most sacred texts. The Gita teaches a system of yogas, or 'paths for coming to union with God.'

In Paths to God, Ram Dass brings the heart of that system to light for a Western audience and translates the Gita's principles into the manual for living the yoga of contemporary life.

While being a guide to the wisdom of the Bhagavad Gita, Paths to God is also a template for expanding our definition of ourselves and allowing us to appreciate a new level of meaning in our lives.