Paul Temple And The Conrad Case 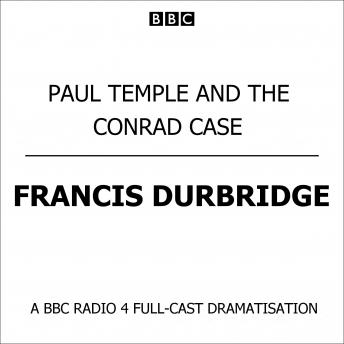 From 1938 to 1969 crime novelist and detective Paul Temple, together with his Fleet Street journalist wife Steve, solved case after case in one of BBC radio's most popular serials. They inhabited a sophisticated, well-dressed world of chilled cocktails and fast cars, where the women were chic and the men wore cravats - a world where Sir Graham Forbes of Scotland Yard usually needed Paul's help with his latest tricky case. The case this time involves Dr Conrad's daughter Betty, who has disappeared from her finishing school in Bavaria. Paul is invited by the police to go over there to help trace the missing girl. Initially, though, even he is baffled, since the only clue to the mystery is an unusual cocktail stick found in her bedroom. Can Paul work it out? This edition also includes a bonus interview with Francis Durbridge.

Paul Temple And The Conrad Case