Paul Temple And The Geneva Mystery 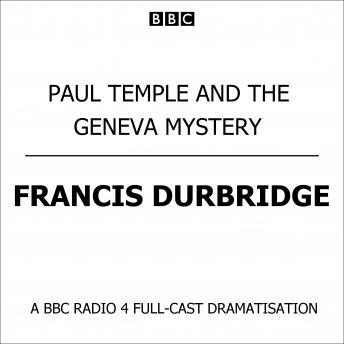 For thirty years the fictional crime novelist and detective Paul Temple, together with his Fleet Street journalist wife Steve, solved case after case in one of BBC Radio's most popular series. They inhabited a sophisticated world of chilled cocktails and fast cars, a world where Sir Graham Forbes, of Scotland Yard, usually needed Paul's help with his latest tricky case. Paul is contracted by one Maurice Lonsdale, whose brother-in-law was apparently killed in a car accident whilst abroad. His widowed sister Margaret is increasingly convinced that her husband is still alive - and she wants Paul Temple to investigate! Paul and Steve find that their own lives are soon in danger as they become embroiled in a deception stretching from London to Switzerland.

Paul Temple And The Geneva Mystery