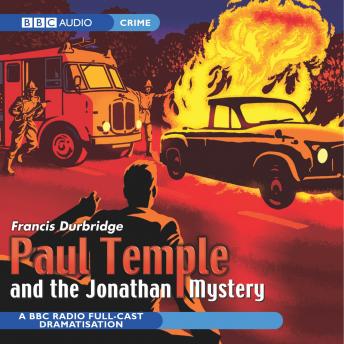 Paul Temple And The Jonathan Mystery

From 1938 to 1969 crime novelist and detective Paul Temple, together with his Fleet Street journalist wife Steve, solved case after case in one of BBC radio’s most popular serials. They inhabited a sophisticated world of chilled cocktails and fast cars, where the women were chic and the men wore cravats – a world where Sir Graham Forbes, of Scotland Yard, usually needed Paul’s help with his latest tricky case. This time, the case involves the Fergusons, who Paul and Steve meet while on the way home from New York. They are flying to England to visit their son Richard, a student at Oxford University. But at the airport, there is shocking news: Richard has been murdered, found shot dead in his room. The only clues are a postcard from Harrogate signed ‘Jonathan’, and Richard’s missing gold signet ring. But who is Jonathan, and what is his connection to the dead man? It is up to Paul to find the answer...

Paul Temple And The Jonathan Mystery