Paul Temple And The Lawrence Affair 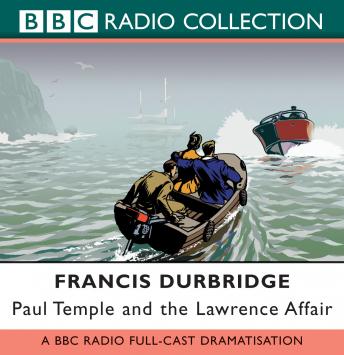 For thirty years the fictional crime novelist and detective Paul Temple, together with his Fleet Street journalist wife Steve, solved case after case in one of BBC Radio's most popular series. They inhabited a sophisticated world of chilled cocktails and fast cars, a world where Sir Graham Forbes, of Scotland Yard, usually needed Paul's help with his latest tricky case. Whilst she and Paul are staying in the fishing village of Downburgh, Steve gets the uneasy feeling that she is being watched by a man at Fisherman's Point. A pleasant boat trip turns into a nightmare when their craft gets shot at - and the boatman himself is later discovered drowned at sea. Back in London, the daughter of the head of CI5 has disappeared, and Sir Graham brings the matter to Paul's attention. Could there be a connection between this and the events in Downburgh?

Paul Temple And The Lawrence Affair