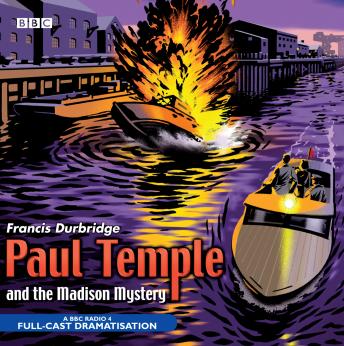 Paul Temple And The Madison Mystery

From 1938 to 1969 crime novelist and detective Paul Temple and his Fleet Street journalist wife Steve solved case after case in one of BBC radio's most popular serials. They inhabit a sophisticated, well-dressed world of chilled cocktails and fast cars, where the women are chic and the men wear cravats - and where Sir Graham Forbes of Scotland Yard always needs Paul's help with a tricky case. Returning from America by ocean liner, the Temples enjoy the company of their fellow passengers, only to find one of them dead the next morning - and when Paul and Steve get home to London, Sir Graham is waiting to plunge them into one of their most thrilling and dangerous adventures, the pursuit of a ruthless international gang of counterfeiters. As knives fly and bombs explode, the key to the puzzle seems to lie in a coin on the end of a watch-chain... This new production for BBC Radio 4 uses the original scripts, vintage sound effects and much of the original incidental music from a lost archive 1949 production. As far as possible, it is a technical and stylistic replica of how that production might have sounded had its recording survived.

Paul Temple And The Madison Mystery