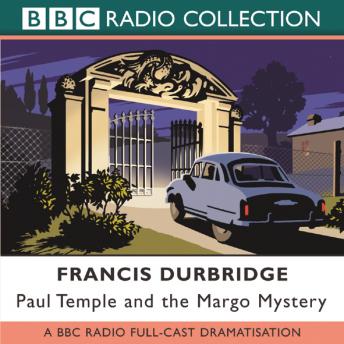 Paul Temple And The Margo Mystery

For thirty years the fictional crime novelist and detective Paul Temple, together with his Fleet Street journalist wife Steve, solved case after case in one of BBC Radio's most popular series. They inhabited a sophisticated world of chilled cocktails and fast cars, a world where Sir Graham Forbes, of Scotland Yard, usually needed Paul's help with his latest tricky case. Flying home from a lecture tour of America, Paul Temple encounters Mike Langdon who is seeking to persuade his employer's spoilt daughter Julie to give up her boyfriend, pop-singer Tony Wyman. Meeting Paul at the airport, Steve is drugged and kidnapped. She is released without harm - but mysteriously in possession of a coat, bearing the label 'Margo'. As Mike seeks Paul's help, the Temples enter into a dangerous web of lies and murder.

Paul Temple And The Margo Mystery