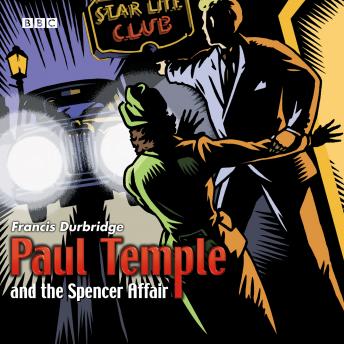 Paul Temple And The Spencer Affair

From 1938 to 1969 the fictional crime novelist and detective Paul Temple, together with his Fleet Street journalist wife Steve, solved case after case in one of BBC radio’s most popular series. When young drama student Mary Dreisler is found murdered in her flat, her father instantly sends for Paul Temple. There appears to have been no struggle, no robbery - no motive. The only possible clue is a package that arrives for the dead girl. It contains a gramophone record called 'My Heart and Harry' and attached is a note: ‘Adored every minute of it - Spencer’. Who is Spencer? Does the song have anything to do with the murder? If anyone can find the answers, Paul can...

Paul Temple And The Spencer Affair