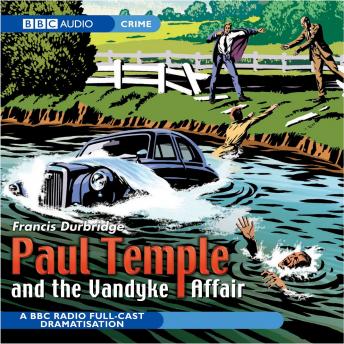 Paul Temple And The Vandyke Affair

From 1938 to 1969 the fictional crime novelist and detective Paul Temple, together with his Fleet Street journalist wife Steve, solved case after case in one of BBC radio's most popular series. They inhabited a sophisticated world of chilled cocktails and fast cars, where the women were chic and the men wore cravats - a world where Sir Graham Forbes, of Scotland Yard, usually needed Paul's help with his latest tricky case. In this adventure, Paul Temple is called in to investigate the disappearance of the Desmond baby, and the 'Sitter-In' Miss Millicent. When they visit Mary Desmond she is, understandably, very upset - it's already been a week since her eighteenth-month-old daughter vanished. The only clue is a telephone message left in Miss Millicent's handwriting: 'A Mr Vandyke telephoned, he left no message'. However, no-one knows who this mysterious Mr Vandyke is... This audio edition also includes the BBC Radio 4 programme The Radio Detectives: 'Send for Paul Temple', an affectionate look at the indomitable husband and wife team, Paul and Steve Temple. It features an exclusive interview with the definitive Paul Temple, Peter Coke, and rediscovered vintage recordings.

Paul Temple And The Vandyke Affair