The Paul's Letters to the Corinthians 1 & 2: The New Testament, Revised English Edition 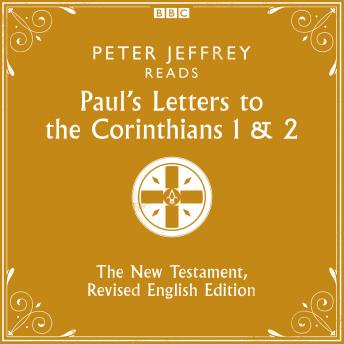 'Paul’s Letters to The Corinthians 1 & 2': Peter Jeffrey reads the second and third of Paul’s Letters, in which he writes to the Christian community in Corinth, Greece. Specially composed music is included. The readings were part of BBC Radio 4's series of 341 daily episodes of the Bible, broadcast in 1991 and 1992. Abridged by Elizabeth Bradbury. 'The New Testament': These abridged readings of the New Testament are taken from the 1989 Revised English Bible, which was translated directly from the original Hebrew, Aramaic and Greek into modern English to produce a Bible that was at once accessible and authoritative.