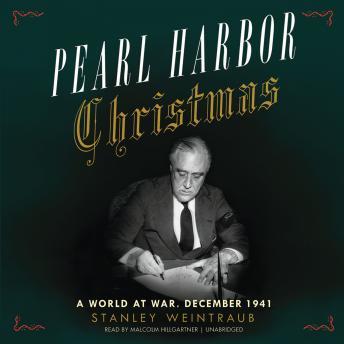 Christmas 1941 came little more than two weeks after the attack on Pearl Harbor. The shock—in some cases overseas, elation—was worldwide. While Americans attempted to go about celebrating as usual, the reality of the just-declared war was on everybody’s mind. United States troops on Wake Island were battling a Japanese landing force and, in the Philippines, losing the fight to save Luzon. In Japan, the Pearl Harbor strike force returned to Hiroshima Bay and toasted its sweeping success. Across the Atlantic, much of Europe was frozen under grim Nazi occupation.
Just three days before Christmas, Churchill surprised Roosevelt with an unprecedented trip to Washington, where they jointly lit the White House Christmas tree. As the two Allied leaders met to map out a winning wartime strategy, the most remarkable Christmas of the century played out across the globe.
Pearl Harbor Christmas is a deeply moving and inspiring story about what it was like to live through a holiday season few would ever forget.