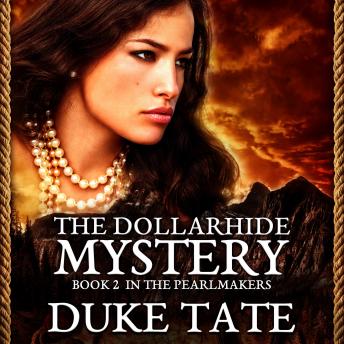 The Pearlmakers: The Dollarhide Mystery

In book two of The Pearlmakers saga, The Dollarhide Mystery, Teddy Dollarhide is now in love with a riveting Spanish woman named Alicia, whose eyes remind him of a woman from his dreams and hypnotism sessions about the elusive Spanish galleon he and his crew have been searching for.

Hunting in a new location, his team finds a hefty quantity of antique gold at the bottom of the ocean. After celebrating, Alicia reluctantly informs Teddy that she has been diagnosed with an inoperable brain tumor. Utterly devastated, Teddy begins to help her with a special concoction he brought up from La Gracia that helped cure his cat, Bear, of feline AIDS. Meanwhile, a stealthy gun hired by some aggressive property developers, Bateman and Banks, is now after Teddy’s finds, putting more pressure on him to sell off his historic estate, Isabella.

The boys and their girlfriends take a road trip to the Sierras in search of the long-lost treasure that their great relative Luke Dollarhide never found with the various clues he left behind in his journals. Stopping at their old summer camp, Camp Big Bear in California, which rests on the land where Luke's treasure is rumored to be, they meet the current owner, strike a deal, and sign a contract.

Back in Florida, Alicia starts to make her unique pearl necklaces and sell them as the strange elixir seems to be improving her health. Out west, the boys find something special in the most unusual place, but people are ready to steal it from them at every turn.

This second installment in The Pearlmakers saga weaves a tale about hope, family treasure, and awakening love in a lost heart.

This title is due for release on January 29, 2021
We'll send you an email as soon as it is available!