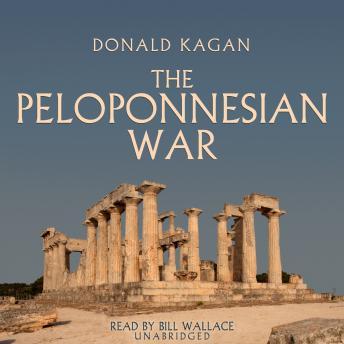 For almost three decades at the end of the fifth century BC the ancient world was torn apart in a conflict that was, within its historical context, as dramatic, divisive, and destructive as the great world wars of the twentieth century. The Peloponnesian War pitted Greek against Greek: the Athenians, with their glorious empire, rich legacy of democracy and political rights, and extraordinary cultural achievement, against the militaristic, oligarchic Spartan state. The result was a period of unprecedented brutality, one that violated even the rugged code that had previously governed Greek combat, and led to an enormous destruction of life and property, intensification of factional and class hostility, and a reversal of the trend toward democratic development. With these came a collapse in the habits, institutions, beliefs, and restraints that had long been the foundation of civilization.
Now Donald Kagan, one of the world’s most respected historians, has written a new account of the Peloponnesian War—a lively, readable narrative that offers a richly detailed portrait of a vanished world while honoring its timeless relevance. In chronicling the rise and fall of a great empire, The Peloponnesian War illuminates the interplay of intelligence and chance in human affairs, the role of great individuals and masses of people in determining the course of events, and the potential of leadership and the limits within which it must operate. Among the brilliant portraits of extraordinary statesmen are those of Pericles, the greatest among the Athenians and a man determined to pursue a policy of deterrence, and the charismatic, duplicitous Alcibiades. Kagan captures the dynamic of war in his thrilling re-creations of some of the most famous military campaigns of antiquity.
With its fresh examination of a pivotal moment of Western civilization, The Peloponnesian War is a magisterial work of historiography—a chronicle of a dark time whose lessons are especially resonant today.