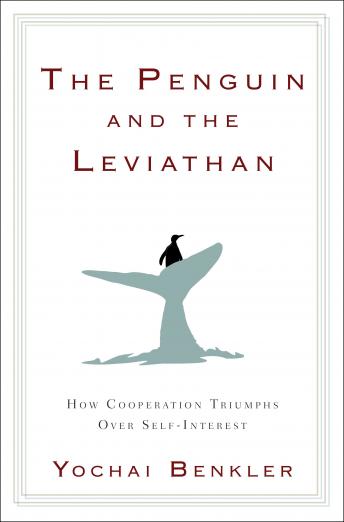 The Penguin and the Leviathan: How Cooperation Triumphs over Self-Interest

What do Wikipedia, Zip Car’s business model, Barack Obama's presidential campaign, and a small group of lobster fishermen have in common? They all show the power and promise of human cooperation in transforming our businesses, our government, and our society at large. Because today, when the costs of collaborating are lower than ever before, there are no limits to what we can achieve by working together.

For centuries, we as a society have operated according to a very unflattering view of human nature:  that, humans are universally and inherently selfish creatures. As a result, our most deeply entrenched social structures – our top-down business models, our punitive legal systems, our market-based approaches to everything from education reform to environmental regulation - have been built on the premise that humans are driven only by self interest, programmed to respond only to the invisible hand of the free markets or the iron fist of a controlling government.

In the last decade, however, this fallacy has finally begun to unravel, as hundreds of studies conducted across dozens of cultures have found that most people will act far more cooperatively than previously believed.  Here, Harvard University Professor Yochai Benkler draws on cutting-edge findings from neuroscience, economics, sociology, evolutionary biology, political science, and a wealth of real world examples to debunk this long-held myth and reveal how we can harness the power of human cooperation to improve business processes, design smarter technology, reform our economic systems, maximize volunteer contributions to science, reduce crime, improve the efficacy of civic movements, and more.

For example, he describes how:

• By building on countless voluntary contributions, open-source software communities have developed some of the most important infrastructure on which the World Wide Web runs
• Experiments with pay-as-you-wish pricing in the music industry reveal that fans will voluntarily pay far more for their favorite music than economic models would ever predic
• Many self-regulating communities, from the lobster fishermen of Maine to farmers in Spain, live within self-regulating system for sharing and allocating communal resources
• Despite recent setbacks, Toyota’s collaborative shop-floor, supply chain, and management structure contributed to its meteoric rise above its American counterparts for over a quarter century.
• Police precincts across the nation have managed to reduce crime in tough neighborhoods through collaborative, trust-based, community partnerships.

A must-read for anyone who wants to understand the dynamics of cooperation in 21st century life, The Penguin and the Leviathan not only challenges so many of the ways in which we live and work, it forces us to rethink our entire view of human nature.

Penguin and the Leviathan: How Cooperation Triumphs over Self-Interest