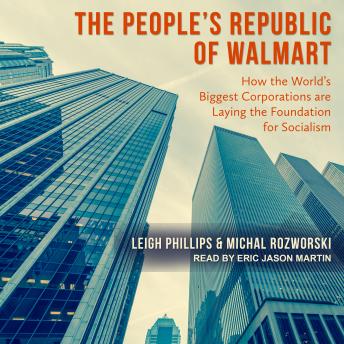 The People's Republic of Walmart: How the World's Biggest Corporations are Laying the Foundation for Socialism

Since the demise of the USSR, the mantle of the largest planned economies in the world has been taken up by the likes of Walmart, Amazon and other multinational corporations.

For the left and the right, major multinational companies are held up as the ultimate expressions of free-market capitalism. Their remarkable success appears to vindicate the old idea that modern society is too complex to be subjected to a plan. And yet, as Leigh Phillips and Michal Rozworski argue, much of the economy of the West is centrally planned at present. Not only is planning on vast scales possible, we already have it and it works. The real question is whether planning can be democratic. Can it be transformed to work for us?

An engaging, polemical romp through economic theory, computational complexity, and the history of planning, The People's Republic of Walmart revives the conversation about how society can extend democratic decision-making to all economic matters. With the advances in information technology in recent decades and the emergence of globe-straddling collective enterprises, democratic planning in the interest of all humanity is more important and closer to attainment than ever before.

People's Republic of Walmart: How the World's Biggest Corporations are Laying the Foundation for Socialism