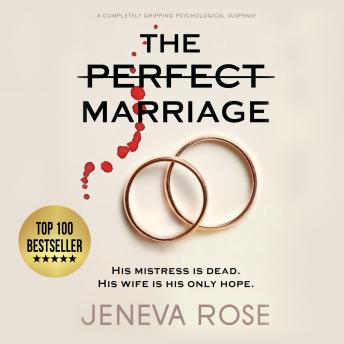 Sarah Morgan is a successful and powerful defense attorney in Washington D.C. At thirty-three years old, she is a named partner at her firm and life is going exactly how she planned. The same cannot be said for her husband, Adam. He is a struggling writer who has had little success in his career. He begins to tire of his and Sarah’s relationship as she is constantly working. Out in the secluded woods, at Adam and Sarah’s second home, Adam engages in a passionate affair with Kelly Summers. Then, one morning everything changes. Adam is arrested for Kelly’s murder. She had been found stabbed to death in Adam and Sarah’s second home. Sarah soon finds herself playing the defender for her own husband, a man accused of murdering his mistress. But is Adam guilty or is he innocent?

A must read! Story line keeps you wanting more and the ending does not disappoint.

I found it alright but not a mindblowing plot!

Kept me intrigued and guessing the entire time. I didn't see the ending coming (and I usually do!). Highly recommend!!

I don’t want to give any spoilers, but omgg 6 hours of this book was mind numbing. It’s so hard to give a good review for a book when the best part is the last few chapters/ last hour. The twist was amazing, but I need a refund or 6 hours of my life back. This whole book could have been a great 1 hour podcast. So many unnecessary characters and conversations. I do thank you for a few good naps bc the narrator’s voice was lovely, but I’d like my credit back.

The author must have a limited vocabulary since she uses the f word over a hundred times (no exaggeration). It just got old. Several of the characters were annoying and shallow. Sorry I wasted my time and money on this book.

What a twist! Well worth the listen (of which I did in record time).

Wow, I did not see that coming. The book kept me on my toes- really loved it. Great narration too.

The summary drew me in because it sounded like an interesting read but once I started??? I COULD NOT STOP LISTENING. I couldn’t wait until I could get a free moment to listen again. This was SUCH A GOOD LISTEN.

Absolutely loved this! So shocked at the end!

This book was excellent

If you are over 30 and/or not emotionally crippled, skip this book. It is contrived, immature, and reminiscent of teenage angst and a very misguided understanding of what it means to be a strong and independent person, let alone woman. The caricature of the sassy, bitchy gay man coupled with the assertion that 33 is too old for a woman to have children was bad enough but add that the over the top cursing to express emotion and I question the decision to even publish this book.

Great Story, unexpected ending! Even if I think it's not fully thought throw - there are some scenes that don't fit together. But I don't want to spoil anything, so I don't say anything more about the story.

Really enjoyed even though I figured it out.

I expected more out of this book. I honestly was not shocked when reading the end. I didn’t see the “twists and turns” ppl raved about and it honestly, I felt like I was given the run around. Yes, it keeps you wanting more, but you had the answer from the beginning.

It was okay, I enjoyed it for the most part

Good book! Based on a true story! Surprise ending.

All the male characters had the same voice...that was disconcerting. The plot definitely kept you guessing; although hardly realistic...it was a "dark" novel...far too many f- bombs...

Loved this book!! Kept your attention and the narration was pretty good.

The book kept me in suspense through out the 67 chapters. It is well written with a plan out plot. I suspected her for a moment but quickly discarded my believe because of her display of seeking to free him. still wondering who the third DNA belongs to but suspect the other cop- husband friend.