A Personal Stand: Observations and Opinions from a Freethinking Roughneck 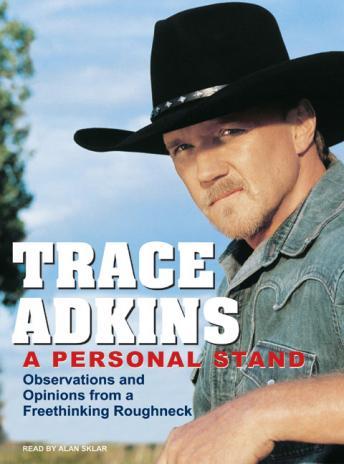 Country music superstar Trace Adkins isn't exactly known for holding back what's on his mind. And if the millions of albums he's sold are any indication, when Trace talks, people listen. Now, in A Personal Stand, Trace Adkins delivers his maverick manifesto on politics, personal responsibility, fame, parenting, being true to yourself, hard work, and the way things ought to be.

In his inimitable pull-no-punches style, Trace gives us the state of the union as he sees it, from the lessons of his boyhood in small-town Louisiana to what he's learned headlining concerts around the world. Trace has worked oil rigs in the Gulf of Mexico, been shot in the heart, been inducted into the Grand Ole Opry, and braved perhaps the greatest challenge of all: being the father of five daughters. And shaped by these experiences, he's sounding off.

-I'm incredibly frustrated with the state of American politics. If there were a viable third party, I'd seriously consider joining it.

-If anybody wonders who the good guys are and who the bad guys are in this world, just look at the way we teach our children as opposed to the way the fundamentalist Muslims teach their children.

-I believe the easiest way to solve the illegal immigration enforcement problem is to go after the employers who hire illegal aliens.

-As a society, we're unwilling to sacrifice our luxuries and our conveniences in order to conserve. We won't change until we're forced to.

-The war on terror is like herpes. People can live with it, but it'll flare up from time to time.

Brash, ballsy, persuasive, and controversial, A Personal Stand isn't just the story of Trace Adkins's life; it's the story of what life can teach all of us.

Personal Stand: Observations and Opinions from a Freethinking Roughneck

This title is due for release on January 21, 2008
We'll send you an email as soon as it is available!