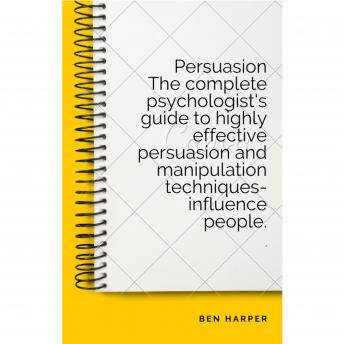 It’s never easy to feel like you might be getting taken advantage of. Whether it’s a spouse, a friend, a relative, a child, a sibling, or even just the person that makes your coffee in the morning, anyone is capable of taking advantage of other people.

In the same way, anyone is at risk for being the person that is getting manipulated. Even the most powerful people might be under the influence of someone else’s manipulation. Having control over another person is a very powerful feeling, and some people use this as their life source. Other people have been so controlled by others throughout their lives that they don’t have an identity other than the one of their abuser.

This book aims to break apart three main ways that someone might be getting taken advantage of. There will be examples of how to identify this type of manipulation, and what can be done to stop and prevent further toxic behavior.

The first step in the recovery process is understanding manipulative behavior at its core. It’s important to figure out what a manipulator looks like, and how they might specifically take advantage of other people. By understanding this you're better equipped to identify and defend against the manipulation.

This book isn’t going to be about how to use these techniques on others to manipulate them. Manipulation is dangerous and it’s crucial to understand the damage that this tool can do. Many people live unhappy lives because they have been so manipulated by others. It’s time for that deception to end, and instead, you should be putting focus on improving relationships and overall self-esteem.

Just because someone is a victim of manipulation doesn’t mean they might not also be a manipulator themselves. Often, the two go hand in hand. It’s tricky behavior, but if more is known about it, there will be a better understanding of how to stop this toxic pattern.

This title is due for release on February 15, 2020
We'll send you an email as soon as it is available!