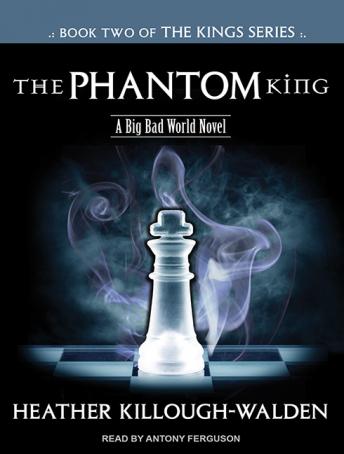 Siobhan Ashdown was born of magic; it rides her blood like a phantom, tainted and dark and unpredictable. She is a warlock, and the power within her is unlike any before known to her kind. So it's no surprise that the most powerful of the demons who feed off of this warlock magic not only recognizes the enormous potential she represents but determines that he will possess her at any cost.
Even if it means war with the entire supernatural world.

Thanatos has ruled Purgatory as the Phantom King since time immemorial. King of a vast plane of solitude, he is a free spirit, a lone rider, a tattooed man of wind and dust and nonexistent boundaries. Then he turns around one morning to find himself face to face with Siobhan Ashdown, a woman with hair as red and wild as his soul, eyes like melted gold, and a spirit as elusive as his own. Time stops, the world tilts, and the fact that she attacks him right off the bat does little to deter his romantic convictions-or his desire to sink his fangs into her neck.

Thirteen Kings are severed by lust and greed, an ancient vampire and his rogue creation lay claim to what is not theirs, the whisperings of war begin to shake the foundation of the supernatural world, and primordial evil awakens from its slumber to slither across the land in this second installment in Heather Killough-Walden's Kings series.

This title is due for release on May 6, 2013
We'll send you an email as soon as it is available!