Philip Nolan: The Man Without a Country 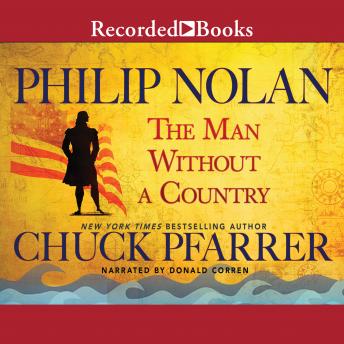 Philip Nolan: The Man Without a Country is Chuck Pfarrer's captivating adaptation of Edward Everett Hale's American classic 'The Man Without a Country,' first published in The Atlantic Monthly more than a century ago. Masterfully blending history and fiction, Pfarrer tells the story of a young artillery officer, Philip Nolan, who becomes embroiled in Aaron Burr's 1807 conspiracy to invade the territories of the Louisiana Purchase. Insinuating his scheme has official approval, Burr convinces Nolan to carry a coded message into the Orleans Territory. Nolan has no knowledge of the former vice president's intended treason--and Burr has no idea that Thomas Jefferson has discovered his scheme. Soon Philip Nolan is in military custody with Burr, charged an accessory to the plot. The nation holds its breath as Burr is tried for attempting to tear apart the Union. The charges against Burr seem ironclad, but his lawyers are clever, and Burr walks free. An embarrassed prosecution looks for a scapegoat, and expands the charges against Nolan to include desertion and sedition. Learning that his own court martial will proceed, despite Burr's acquittal, Nolan denounces his accusers, damns his country, and tells the court he wishes never again to hear the words 'United States' as long as he lives. The judges return with an ominous verdict: the prisoner's wish will be granted. Nolan is sentenced to permanent exile aboard a series of U.S. warships, never again to hear news from or speak of his country. Decades pass. Shuttled from ocean to ocean, Nolan realizes he is a stateless person, estranged from his keepers and forgotten by his country. Eventually passed aboard an American frigate in the Mediterranean, Nolan comes into the custody of a newly commissioned lieutenant, Frank Curran. When Barbary pirates capture an American whaleship, the pair is drawn into a web of international deceit and mortal danger. As a rescue mission is launched, Nolan teaches the young officer a lesson about duty, loyalty, and the meaning of patriotism. Equal parts adventure, naval history, and morality tale, Philip Nolan: The Man Without a Country is more than frigate duels and small boat actions. Intricately plotted and beautifully crafted, the novel is a poignant and closely observed examination of the human condition.

Philip Nolan: The Man Without a Country