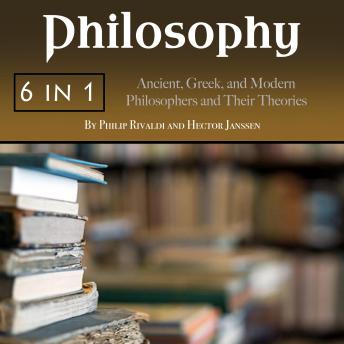 Philosophy: Ancient, Greek, and Modern Philosophers and Their Theories

This is a 6-book bundle, consisting of these books:


Book 1: Confucius has definitely left a mark on the world of Eastern philosophy. His ideas were revolutionary and impressive enough for people to follow him, record his works, and start a group of devoted followers. In the first chapter, more light will be shed on this. The second is Aristotle, a focused thinker who received a name with fame. His clinical examinations and his references to Plato and Socrates are known in Greek history.

Book 2: The first in line is Marcus Aurelius, a stoic emperor who reigned with righteousness and justice. The second is Hipparchia, a cynic who broke through traditions and took a second look at society and its principles.

Book 3: In this guide, we will highlight and compare some of these differences and similarities. Some other chapters are devoted to several philosophers from both regions in the world, namely Pythagoras, and Aristippus of Cyrene.

Book 4: Stoicism is a concept that has been studied more and more lately. The philosophy that dates back all the way to Socrates has been significant in many people’s lives. So, today, we will expand on what stoicism is, where it originated from, and how you can use it in your life to become a better person and achieve more.

Book 5: Stoicism can help people react better to each other in family relationships. With the virtues described, great improvements can be made in the way we interact with each other.

Book 6: A lot of people have heard of stoicism, some even know what it is, but the question is: How do you become more stoic? The answer to this question lies at the heart of this book. You will learn of new methods and insights to accomplish this. Furthermore, some very important quotes about stoicism will be revealed.