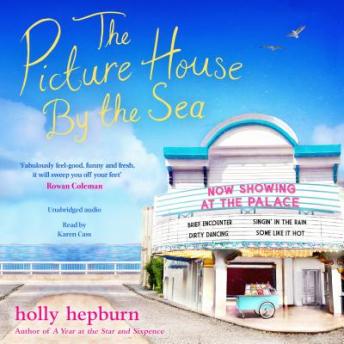 The Picture House by the Sea

The brilliant new novel from the bestselling author of A Year at the Star and Sixpence. Perfect for fans of Cathy Bramley. This audio edition is read for you by Karen Cass, reader for Jill Mansell, Carole Matthews and Maggie O'Farrell.

The picture house by the sea is the Palace at Polwhipple – a lovely art deco cinema, nestled in front of azure Cornish seas. But it is long past its heyday now, and its only saving grace is Ferrelli's, the family run ice-cream concession in the foyer, which is widely known as the best ice-cream for miles.

So when Ferdie, the owner of Ferelli's, breaks his leg, his granddaughter Gina drops everything to come and help out. But when she arrives she is dismayed by the state of the cinema, which she remembers fondly from summer holidays when she was little, and she is determined to give it the makeover it deserves. Along with local renovation expert Ben, she sets about reviving the Palace to its former glory.

But the cinema needs more than a lick of paint. Its very future is under threat from a developer with greed in his eyes. Can Gina save the place before it is too late?

** Disclaimer: originally published in four parts as eBooks – Brief Encounter, Singing in the Rain, Dirty Dancing and Some Like it Hot **

Enjoyed listening to this book. Love Cornwall and was on holiday there when listening to it. The narrator is really good and brought the book to life.

This title is due for release on September 21, 2017
We'll send you an email as soon as it is available!