Pimped: The shocking true story of the girl sold for sex by her best friend 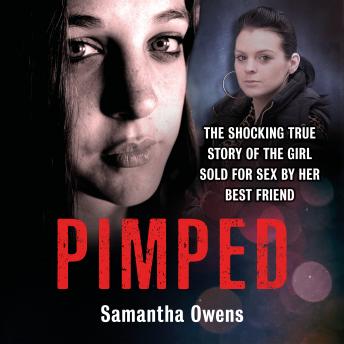 By the age of thirteen, vulnerable Sheffield teenager Samantha Owens had fallen through the cracks in the care system. Bounced around numerous foster carers after her home life became too chaotic, Samantha thought she had found a friend in the streetwise Amanda Spencer. The older girl bought her clothes, styled her hair and found her places to stay. Samantha's welfare was the last thing on Spencer's mind, however, as in reality she was grooming the young girl for exploitation of the worst possible kind.

Over the course of the next few months, Samantha was plied with alcohol and drugs and pimped out to over fifty men for Spencer's gain. Raped, abused, and with no chance of escape, Samantha was at the mercy of the calculating, ruthless and intimidating Spencer. It took a police investigation of two years to bring her and a small gang of cohorts to justice and, in 2014, Spencer was jailed for twelve years. With her abusers in jail, and Samantha bravely rebuilding her life, her shocking story is a stark warning to those who believe child sexual abuse follows any set pattern.

Pimped: The shocking true story of the girl sold for sex by her best friend