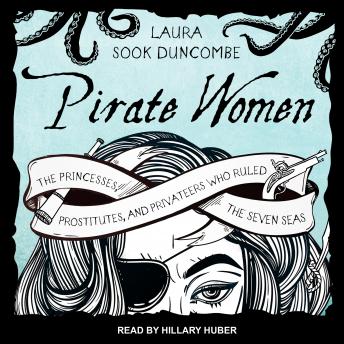 Pirate Women: The Princesses, Prostitutes, and Privateers Who Ruled the Seven Seas

In the first-ever Seven Seas history of the world's female buccaneers, Pirate Women: The Princesses, Prostitutes, and Privateers Who Ruled the Seven Seas tells the story of women, both real and legendary, who through the ages sailed alongside-and sometimes in command of-their male counterparts. These women came from all walks of life but had one thing in common: a desire for freedom. History has largely ignored these female swashbucklers, until now. Here are their stories, from ancient Norse princess Alfhild and warrior Rusla to Sayyida al-Hurra of the Barbary corsairs; from Grace O'Malley, who terrorized shipping operations around the British Isles during the reign of Queen Elizabeth I; to Cheng I Sao, who commanded a fleet of four hundred ships off China in the early nineteenth century.

Author Laura Sook Duncombe also looks beyond the stories to the storytellers and mythmakers. What biases and agendas motivated them? What did they leave out? Pirate Women explores why and how these stories are told and passed down, and how history changes depending on who is recording it. It's the most comprehensive overview of women pirates in one volume and chock-full of swashbuckling adventures that pull these unique women from the shadows into the spotlight that they deserve.

Pirate Women: The Princesses, Prostitutes, and Privateers Who Ruled the Seven Seas