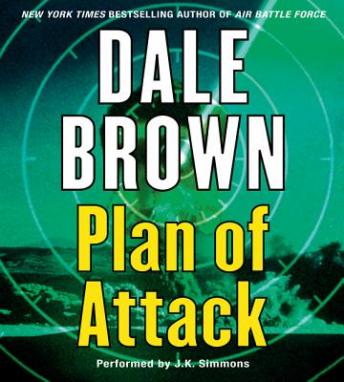 Dale Brown is the author of fourteen New York Times bestsellers, and now in Plan of Attack, he provocatively turns our attention to the threat of a nuclear attack that is beyond our imaginings.

U.S. Air Force aerial warfare expert Major General Patrick McLanahan has been demoted and moved back to a desk job. Keeping a keen eye on what's going on with old enemies, he notices that Russia's heavy bomber and tactical bomber bases are busier than ever. He tries to get his superiors to pay attention but is ignored. Russian president General Anatoliy Gryzlov is determined to punish McLanahan for a previous bombing of a Russian air base. To make his point, Gryzlov launches an all-out sneak attack on America that devastates our strategic air forces.

McLanahan has collected information he needs to plan a counterstrike that could stop the Russian war machine dead in its tracks. But McLanahan is no longer in charge of Air Battle Force, his combat unit of the future, and the Russian sneak attack has left the embattled U.S. president with few options: retaliate with every weapon in his arsenal, even if it triggers a global thermonuclear war; agree to a cease-fire on Russia's terms ... or listen to a disgraced and discredited young bomber commander's long-shot plan of attack. To prevent a destructive stalemate, Patrick McLanahan may have to take matters into his own hands.