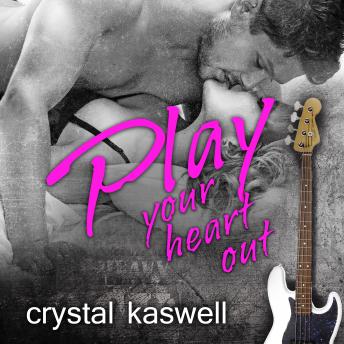 Play Your Heart Out

Jess James has her eye on the prize. She is finding the money to pay for law school. Period. It doesn't matter how lonely she feels three thousand miles from home, how exhausted she is from working overtime as a cocktail waitress, or how deep the knife wound in her back cuts. She is going to be a lawyer, whatever it takes.

Only she doesn't have what it takes. She can barely afford to pay her rent.

Sinful Serenade bassist Pete Steele has enough to pay Jess's rent and buy her a small island in the Caribbean. The famous, talented rock star has everything . . . except the one thing his manager wants. Pete rose to fame as a devoted boyfriend. Doesn't matter that his ex slept with his best friend. He needs to stop screwing his way through Los Angeles to keep the record company happy. The sweet blond waitress is exactly the girl he needs on his arm if he wants to clean up his dirty reputation.

Their arrangement is simple: he pays her tuition, she plays his girlfriend. They'll lie to the world but not to each other. Especially not when they're alone, in his bed, him figuring out exactly which buttons to push to get her moaning his name.

Play Your Heart Out