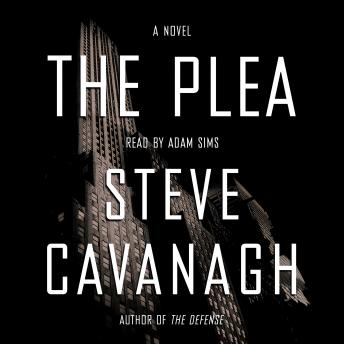 The Plea: A Novel

'This guys is the real deal. Trust me.' — Lee Child

From crime writer Steve Cavanagh comes another gripping audiobook featuring lawyer Eddie Flynn. This is the legal thriller listeners have been waiting for.

An innocent client. A wife in jeopardy. A locked room mystery. Who will take The Plea?

Billionaire David Child swears he didn’t murder his girlfriend, Clara. But the evidence overwhelmingly shows that David killed her: the security video showed no one else entering their apartment, the murder weapon was in his car, and he was covered in gunshot residue he can’t explain.

The FBI believes David’s arrest and obvious guilt could help them take down a huge money laundering scheme - if they can get him to testify.

Con-artist-turned-lawyer Eddie Flynn is given the job: persuade David to plead guilty and give the agents the evidence they need. If Eddie can’t get David to take a plea bargain, the FBI has incriminating files on Eddie’s wife – and will send her to jail. But David insists that he didn’t murder anyone.

As the FBI pressures Eddie to secure the guilty plea, Eddie becomes increasingly convinced that David is telling the truth. With adversaries threatening, Eddie has to find a way to prove David’s innocence and find out if there’s any way he might have been framed. But the stakes are high: Eddie’s wife is in danger. And not just from the FBI…

More praise for The Plea:

“The Plea is one of the most purely entertaining books you'll read this year. It's a blast.” —John Connolly, bestselling author of the Charlie Parker novels

'Nasty, vicious, ruthless. That's the way we like our legal mysteries, so The Plea fits the bill.' — New York Times Book Review

I listened to this right after listening to The Defense by the same author and these books are phenomenal! The narrator/reader is great! He does a great job with all the voices. I laugh, I cry and I’m in suspense through the whole book! The main character Eddie you can’t help but love! I can’t wait to listen to Thirteen!

Great story; great narration. I enjoyed it from start to finish!

This is one of the books you don’t want to put down. I love that it starts with part of the conclusion to keep you trying to figure it out all the way through the read. Great story!

Wow!!! A must read, it kept me hooked from beginning to end. The narrator was fantastic and really brought the characters to life.