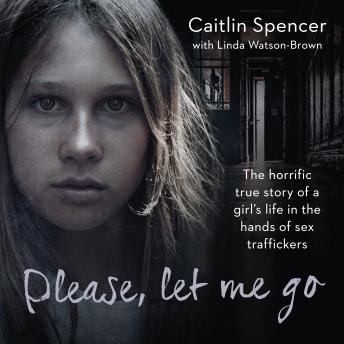 Please, Let Me Go: The Horrific True Story of a Girl's Life In The Hands of Sex Traffickers

From the age of 14, Caitlin was completely controlled, repeatedly raped, provided with alcohol, given drugs, sold and passed on to new gangs over and over again. The majority of her abusers were Pakistani men, who were blatant in their attacks upon her, often collecting her from school or home, to be taken to flats they owned, family homes, or hotels booked for the day, to be horrifically and systematically abused.

At a time when the abuse ring realities of young white women in Rotherham and other major English cities are coming to light, Caitlin's story will appal readers - not just because of the degree of horrific attacks which were perpetrated upon her, but also because of the ways in which the authorities refused to act. Caitlin speaks openly about what she has suffered, and also shows just how unwilling many people are to face up to what is happening in our midst, for fear of being called racist. By bravely speaking out, she will, hopefully prove just how deep these problems are and just how the abusers get away with it in plain sight of the authorities.

Please, Let Me Go: The Horrific True Story of a Girl's Life In The Hands of Sex Traffickers