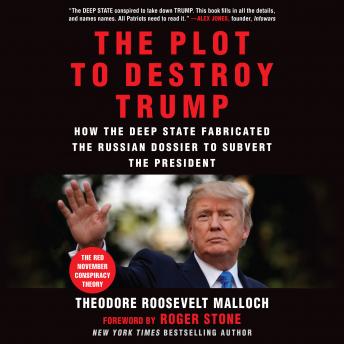 The Plot to Destroy Trump: How the Deep State Fabricated the Russian Dossier to Subvert the President

“The DEEP STATE conspired to take down TRUMP. This book fills in all the details, and names names. All Patriots need to read it.” ―Alex Jones, founder, Infowars
The Plot to Destroy Trump exposes the deep state conspiracy to discredit and even depose the legitimately elected President Donald J. Trump with the fabricated Russian dossier, including:How the unsubstantiated accusations of collusion began with former MI6 agent Christopher Steele, Fusion GPS, and the Democratic National Convention on behalf of Hillary Clinton The opportunistic role played by Russia’s FSB and former KGB agents, according to Putin’s strategy to create chaos in the WestWikileaks, along with Fake News Award–winner CNN, BuzzFeed, and the other liberal media that all played a part in pushing the information to the American people The compromised CIA and FBI personnel who took the dossier and ran with it, despite knowing it was unverifiedThe roles that George Papadopoulos, Carter Page, Bruce and Nellie Ohr, Paul Singer, Paul Manafort, and the Podesta brothers played―or did not play―in the conspiracy against the presidentHow does all this tie together? And what does it mean for Trump’s presidency and American democracy? Ted Malloch names the players, connects the dots, and explains who was behind the plot to create a red November. With a foreword by New York Times bestseller and Trump confidant Roger Stone, The Plot to Destroy Trump uncovers the biggest political scandal since Watergate.

Plot to Destroy Trump: How the Deep State Fabricated the Russian Dossier to Subvert the President