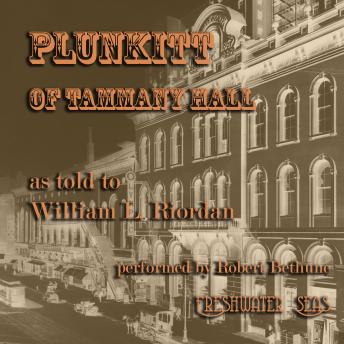 In the days of Tammany Hall, politicians like George Washington Plunkitt spent their careers in service to the city--but first and foremost in the service of

the political machine. Plunkitt seems never to have doubted exactly where he stood on the deeply corrupt, yet amazingly effective politics and government in

which he spent his life; he was entirely in favor of it, and gave it his devoted service while becoming a millionaire in return. He was instrumental in

expanding the New York City park system, in creating the Museum of Natural History, the 155th Street Viaduct, and many other public improvements--and he

profited handsomely from his insider's knowledge of the real estate aspects of them all. In this book, William L. Riordan, one of the "muckracker"

journalists, records Plunkitt's take on politics in Plunkitt's own words--as delivered from the bootblack stand at the New York County Courthouse, Plunkitt's

only office. His take on life, politics, and morality is as delightfully frank as it is astonishingly cynical. Enjoy!