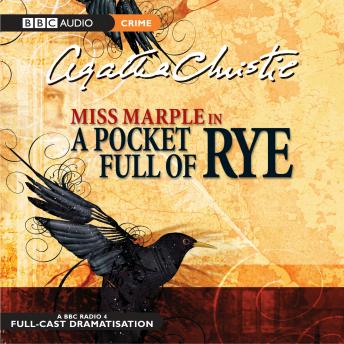 A Pocket Full Of Rye

Wealthy businessman Rex Fortescue is found dead with rye grain in his pocket. His death is followed in quick succession by a woman dying while eating bread and honey, and a maid in her garden. Inspector Neele, in charge of investigating the spate of murders, consults with Miss Marple, who has an interesting and surprising theory to offer. She senses the murderer is dispatching his victims on the basis of the children's nursery rhyme 'Sing a Song of Sixpence'. The similarities are numerous - not least the fact that Rex means 'king', and as a financier, he could be said to have been in his counting house when he died. Soon the blackbirds of the rhyme put in an appearance, not to mention a whole shoal of red herrings. What secrets are lurking at the heart of the Fortescue family? Miss Marple finds herself enmeshed in one of the strangest cases of her life... An intriguing mystery from the Queen of Crime, dramatised with a full cast including Nicky Henson and Derek Waring.