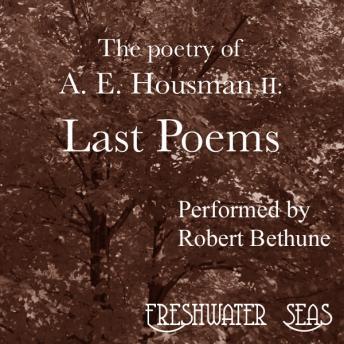 The Poetry of A. E. Housman II: Last Poems

Housman himself knew that his output as a poet would not be large. In his preface to this volume, he wrote, rather touchingly: "I publish these poems, few though they are, because it is not likely that I shall ever be impelled to write much more." He pulled Last Poems together because his life-long friend, Moses Jackson, was dying and Housman wanted Jackson to be able to read these poems before Jackson passed away.

The work in this volume is more varied in form and content than in his first book, and shows a change of heart, a greater acceptance of the human condition, along with a more impersonal voice.

His sense of the finality of life is strong: "Dead clay that did me kindness/I can do none to you/But only wear for breastknot/The flower of sinner's rue." Yet, if anything, his voice is gentler, his spirit calmer and more accepting, and his sense of the eternal stronger than in his first book.

This title is due for release on March 16, 2009
We'll send you an email as soon as it is available!