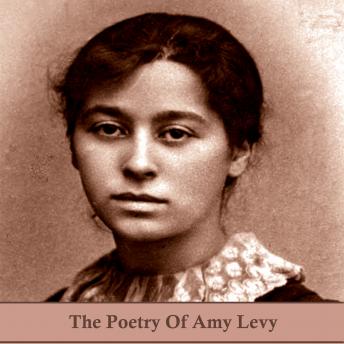 The Poetry of Amy Levy

Amy Levy was born in London, England in 1861, the second of seven in a fairly wealthy Anglo-Jewish family. The children read and participated in secular literary activities and became firmly integrated into Victorian life.Her education was at Brighton High School, Brighton, before studies at Newnham College, Cambridge; she was the first Jewish student when she arrived in 1879, but left after four terms.Amy’s writing career began early; her poem ‘Ida Grey’ appeared when she was only fourteen. Her acclaimed short stories ‘Cohen of Trinity’ and ‘Wise in Their Generation,’ were published by Oscar Wilde in his magazine ‘Women's World’.Her poetic writings reveal feminist concerns; ‘Xantippe and Other Verses’, from 1881 includes a poem in the voice of Socrates's wife. ‘A Minor Poet and Other Verse’ from 1884 comprises of dramatic monologues and lyric poems.In 1886, Amy began a series of essays on Jewish culture and literature for the Jewish Chronicle, including ‘The Ghetto at Florence’, ‘The Jew in Fiction’, ‘Jewish Humour’ and ‘Jewish Children’.That same year while travelling in Florence she met the writer Vernon Lee. It is generally assumed they fell in love and this inspired the poem ‘To Vernon Lee’.Her first novel ‘Romance of a Shop’, written in 1888 is based on four sisters who experience the pleasures and hardships of running a London business during the 1880s. This was followed by Reuben Sachs (also 1888) and concerned with Jewish identity and mores in the England of her time and was somewhat controversial.Her final book of poems, ‘A London Plane-Tree’ from 1889, shows the beginnings of the influence of French symbolism.Despite many friendships and an active life, Amy suffered for many years with serious depressions and this, together with her growing deafness, led her to commit suicide by inhaling carbon monoxide on September 10th, 1889. She was 27.