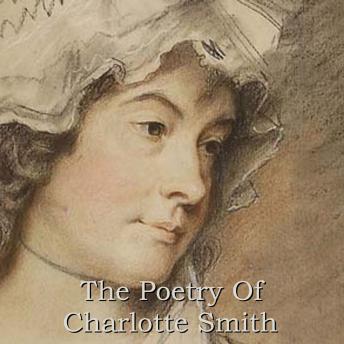 The Poetry Of Charlotte Smith

Charlotte Turner Smith was born on 4th May 1749 in London. Her early years were dominated by her mother's early death and her father's reckless spending. At age 15 she married Benjamin Smith in order to rid her father of his gambling debts. Charlotte was later to write that she now become a "legal prostitute".  Benjamin was violent, unfaithful, more reckless with monies than her father and completely unsupportive with her writing that she had begun to spend more time on. In 1766, Charlotte and Benjamin had the first of their twelve children. She helped with her Father in law's business and upon his death he left much to Charlotte and her children but this inheritance was tied up in legal wranglings that lasted for 40 years and became the inspiration for Dickens' central case in Bleak House. Her husband's spending landed him in prison and as was allowed at the time, Charlotte moved in to join him. It was here in 1784, that she wrote and published her first work, Elegiac Sonnets. It was an instant success, allowing Charlotte to pay for their release from prison and contributing to a revival of the sonnet. Charlotte moved to Chichester where she began to write novels believing she could earn more from their sale and rather unusually publishing all her work under her own name. Her first novel, Emmeline in 1788, was a success and in the next decade she wrote nine more. However, despite their initial success, her finances were a constant source of concern and she was often in debt being forced to move home frequently and impacting on declining health. By 1803, Smith was again poverty-stricken with severe gout which made writing painful and later almost paralysed her. On 23 February 1806, Charlotte finally received some of the inheritance, but was too ill to do anything with it and died on October 28th 1806. William Wordsworth described her as a poet "to whom English verse is under greater obligations than are likely to be either acknowledged or remembered".