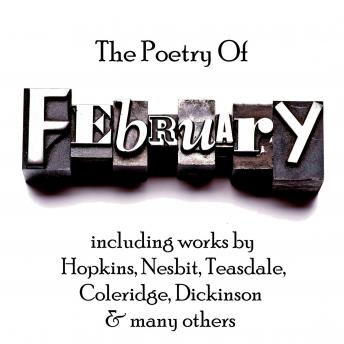 The Poetry of Febuary

Febuary - the second month of the year in the Gregorian calendar, brings not only the shortest month but for lovers everywhere, Valentine's day.

On this and other themes our poets including Hopkins, Nesbit, Teasdale, Coleridge and Dickinson have much to say. Among our readers are Richard Mitchley and Ghizela Rowe. The tracks are; February - An Introduction; Lines On Observing a Blossom On The First of February 1796 By Samuel Taylor Coleridge; On The Death Of Ms Burnite who Died February 2nd 1878 By David John Scott; February 3rd 1830 By Henry Alford; February Morning By Robert Laurence Binyon; Afternoon In February By Henry Wadsworth Longfellow; Verses Written In February 1824 By Joanna Baillie; A Calendar Of Sonnets By Helen Hunt Jackson; In February By Alice Meynell; February 10th 1840 By Henry Alford; Hymn Written Sunday February 11th, 1798 By Robert Anderson; February By Edith Nesbit; Nature of Love By Rabindranath Tagore; February Twilight by Sara Teasdale; A Valentines Song By Robert Louis Stevenson ; The Face That Launched A Thousand Ships By Christopher Marlowe; The Kiss By Dante Gabriel Rossetti; In The Safety Of Your Mouth By Daniel Sheehan; How Like A Winter Hath My Absence Been (Sonnet 97) By William Shakespeare; Winter By Anne Bradstreet; To Sappho By Robert Herrick; February By Sara Teasdale; I Who All The Winter Through By Robert Louis Stevenson; Winters Naked Wood By Daniel Sheehan; February By Arthur Christopher Benson; February By Dollie Radford; For The Anniversary Of John Keats Death By Sara Teasdale; Lines Written In Early Spring By William Wordsworth; At Castle Wood By Emily Bronte; February By Louisa Sarah Bevington; Anne Bronte - In Memory Of A Happy Day In February; To Susanna, February 1824 By Eliza Acton.