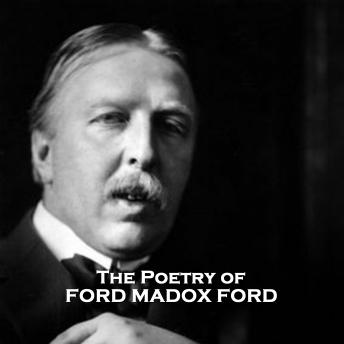 The Poetry Of Ford Madox Ford

Ford Madox Ford was born Ford Hermann Hueffer on 17th December 1873 in Wimbledon, London, England.Today he is best known for one book, 'The Good Soldier', which is regularly held to be one of the 100 greatest novels of all time. But, rather unfairly, the breadth of his career has been overshadowed. He wrote novels as well as essays, poetry, memoirs and literary criticism. Today he is well-regarded but known only for a few works rather than the grand arc of his career.Ford collaborated with Joseph Conrad on three novels but would later complain that, as with all his collaborators, and those he so readily championed, his contribution was overshadowed by theirs.He founded The English Review and The Transatlantic Review which were instrumental in publishing and promoting the works of so many authors and movements.During WWI he initially worked on propaganda books before enlisting. Ford was invalided back to Britain in 1917 but remained in the army giving lectures until the War's end. After a spell recuperating in the Sussex countryside he lived mostly in France during the 1920s.He published the series of four novels known as Parade's End, between 1924 and 1928. These were particularly well-received in America, where Ford spent much of his time from the later 1920s to his death in 1939.His last years were spent teaching at Olivet College in Olivet, Michigan.His poetry is an excellent example of his talents. His evocation of the horrors of War are outstanding examples of the time and have become greatly admired.Ford Madox Ford died on 26th June 1939 at Deauville, France at the age of 65.